The distinctive and graceful red kite was one of the most numerous species of raptor in Britain in the medieval period, but by the turn of the 19th century had been driven to extinction in England and Scotland, with a tiny population clinging on in central Wales. 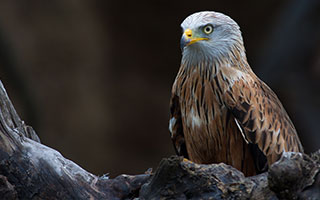 Due to the surrounding habitat not being the most suitable for the birds, the red kite population in Wales was very slow to increase, and hopes of an organic expansion of the breeding population into western England were clearly going to go unanswered.

In 1986 a Red Kite Project Team was set up by the RSPB and the Nature Conservancy Trust (now Natural England and Scottish Natural Heritage, respectively) to address the fortunes of the species. In 1989 a five year reintroduction project was begun in two sites - one in the Chiltern Hills and one in the Black Isle. These sites were selected for numerous factors including annual rainfall, height above sea level, a positive attitude from the local community and a high breeding success of buzzards in the area (indicating a sustainable food supply and low persecution levels).

After agreement from several landowners to support releases on their estates and the construction of wooden release aviaries on both sites, the project was begun in earnest. The young kites brought in (predominantly from populations in Spain and Sweden) would live in these aviaries for the first few weeks. This was the first phase of their eventual re-release to the wild. Several techniques, derived from and perfected by falconers, were used in the process of the successful reintroductions.

The need to keep human contact to a minimum was clearly understood - too much contact with humans, and a direct association between humans and their food, would lead to birds being unsuitable for release due to their being at least partially "imprinted" on humans - a psychological bond between the bird and humans as a perceived "parent". This was achieved in several ways.

To enable observation of the young birds without them being aware of the presence of humans, tiny holes were made in the wooden aviaries, allowing human contact to be kept to the absolute minimum of required veterinary assessments and handling for the fitting of wing tags and transmitters. This is a technique used by modern falconers and breeders, particularly with active breeding pairs in order to keep disturbance of the nest to an absolute minimum.

To avoid the connection of humans with food, all food was provided into the aviaries through a hatch system which prevented the young kites from seeing humans when they fed. Feeding chutes, hatches and other variations are used in rehabilitation and release of injured wild birds of prey to this day for the same reasons. 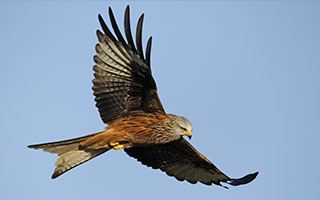 Perches in the release aviaries meant that once the young kites reached fledging age - around seven to eight weeks old - they could begin to learn to fly and manoeuvre before they were soft-released into the wild.

Hacking is a technique often used in falconry - giving birds total freedom in order to facilitate the development of flying skills. At ten to twelve weeks old, the young kites in the project were released in groups and food was provided near to the release site. This was to mimic the few weeks post fledging that most birds of prey (including Red Kites) remain dependent upon their parents. While some of the released birds returned for as much as three weeks to the release site, some dispersed away within a few days. For a carrion focused bird, finding multiple sources of food across a territorial range increases their chance of survival, rather than over reliance on a single source which could disappear.

Some released individuals were tagged with radio transmitters - usually attached to the two central "deck" feathers of the tail - which would hopefully remain until those feathers were moulted out. This allowed for the monitoring of the individual birds and in several recorded cases led to the recover of injured individuals who were later re-released and successfully bred in the wild. In falconry, birds of prey both in display and in private ownership are responsibly flown with telemetry systems, or the more modern GPS systems, to enable the same high chance of location tracking and recovery.

After the success of the first releases - particularly the site in the Chilterns, which following a reintroduced population of ninety three individuals during the five years of the project boasted somewhere in the region of 300 breeding pairs in 2006 - several more releases took place at sites such as Rockingham Forest (Northamptonshire), Stirlingshire (central Scotland), Harewood House (Yorkshire), Dumfries and Galloway (southern Scotland), and the first release near to an urban centre by Northern Kites in Gateshead. The Chiltern release was so successful that the population provided sixty eight individuals to the Harewood House release project. 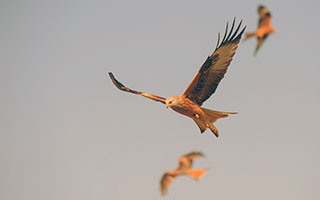 The Red Kite today is a common sight in several parts of the country and is once again a green listed species in Britain. It is no stretch to state that many techniques, technology and indeed understanding and knowledge derived from falconers, raptor breeders and specialist rehabilitators contributed to the clear success of the reintroduction, and thus the restoration of a lost native species.

I volunteered with a bird of prey centre, but now content myself with being an enthusiast, going on hunting days and experiences when I can, and otherwise writing for World of Falconry.